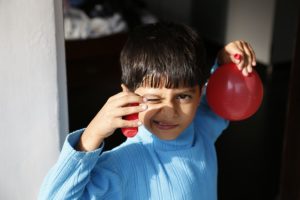 A = Antecedent:  You ask Ryan to shut the door. He goes over to the bookshelf instead.  You walk over, gently put your hand on his elbow, and guide him back to the door to shut it.

B = Behavior: Ryan tries to run from you.

C = Consequence: You can:

Consequence #1 reinforces the running, an undesired behavior.  Bad!  When you reinforce, kids will continue the behavior.  If you give in and don’t make him shut that door, you clearly reinforce the running away from you.  The running will also be reinforced if you give it negative attention by yelling, spanking, or chasing.  Other forms of negative attention would include engaging the child in an argument, lecturing, or getting all mushy because the kid is crying (making you feel like a bad parent).  In all of these cases, Ryan could delay the task or wouldn’t have to close the door at all.  The behavior worked, and by golly, he’ll do it again.

So go the other route. Consequence #2 punishes the behavior and decreases the likelihood of recurrence because the child gets nothing out of it. When he attempts to run, yet you still make him do what is asked, guess what? The behavior doesn’t work for him.  He still has to shut the door.

We’re not going to chase that kid all over creation, but we’re damn sure going to grab him and make sure he goes back and does what we ask.  Calmly and silently herd him to a spot where he can’t get away.  Gently but firmly, physically make him go and close that door.  The more we chase, argue back, lecture, explain, or otherwise give the behavior attention, the more we’re reinforcing the nonsense and encouraging them to keep it up.  So we have to ‘punish’ the behavior and react differently.

This is a new way to look at what we caregivers think about as ‘punishment.’  For our purposes, punishment is not harsh, demeaning, or disrespectful.  It is simply a term to define a calm and peaceful reaction that decreases undesired behavior.

Consider it written in stone: