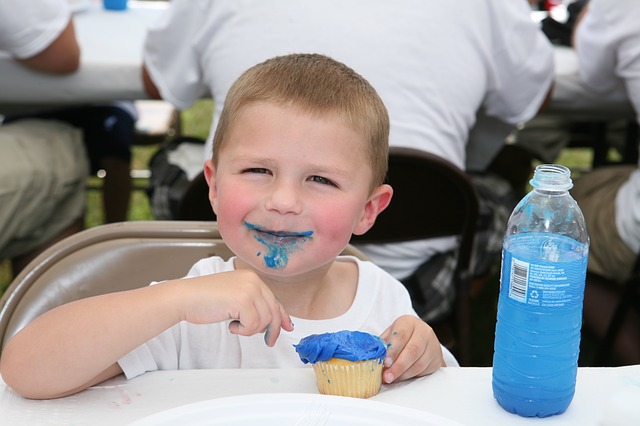 To really get behavior going in the right direction, set it up for success.  Stop being on defense all the time. Try offense.  Go into it with your head in the game, wrapped around what you need to help your child behave.  Get your ingredients out and ready.  You can’t make a batch of homemade cookies without ingredients!  So if your kid is the cookie, what makes you think you can make him sweet and successful if you don’t have butter, sugar, flour, and chocolate chips.

Set It Up for Success

Food has always been a hot button of mine.  You feed your kid crap, and he’ll act crappy.  Pretty straight forward. But it still amazes me how much we wrap our lives around fueling our kids with sugary, icky, processed nonsense.  It floors me how people miss the correlation and still come to me in tears over their children’s behavior.  Even teachers shake their heads in wonder at the kids nonsense.  And I shake mine right back as I look at the packaged cinnamon rolls and cookies they’re eating for snacks.  Gee. . . gosh. . . I don’t know why they’re acting crazy!  Got me!  Maybe your entire class has ADHD???

I was recently doing my little speech therapy gig in an elementary school, working with several little autistic cuties around five to six years old.  And here’s the thing about current educational system wisdom: it teaches reinforcements for good behavior.  This translates into a lot of food.  Not regular food.  Yucky food.

So if you have a completely out-of-control child with autism, as soon as they sit still for three seconds, you give them a reinforcer.  Nice job, buddy!  Now sit still for five seconds this time, and you’ll get another reinforcer.  Woohoo! Kind of trains them that good things happen with cooperation.  You eventually extend the time it takes to get a reinforcer and you’ve got a kid that can participate in an activity for a normal length of time.  Easy enough, right?

Now, don’t get me wrong because these teachers are beautiful, wonderful people and they’ve been at this a lot longer than me, so I have to assume they know what they’re doing.  However, as a mom, I can’t quite wrap my brain around all the food being used as reinforcers.

Because it’s not really food.  It’s junk.  Sugar-infested, hurt-your-teeth kind of junk.  Pretzels would be okay.  I could live with pretzels.  But that’s as healthy as it gets.  Because we’re talking chocolate chips, french fries, potato chips, chocolate granola-bites, gummies, candy, cookies. . . you get the picture.

I was sitting next to a kid the other day who was receiving covered-in-sugar-cereal-squares as a reinforcer. This is a kid who won’t participate in diddly, won’t talk, constantly tries to rip off his clothes, and throws a tantrum every fifteen minutes.  So I understand the need for a reinforcer to participate in music class.  No problem.  But trying to keep a straight face was hard.

My eyes got bigger and bigger as this kid got a new piece of cereal every five seconds. He ended up looking like a snowman, DRENCHED in sugar, hands and face buried in white.  After music class, he went and jumped on the mini-trampoline like a monkey and one of the teachers said, “Wow, he just won’t stop jumping. I don’t know why.” The other replied, “Does he want a cookie?? What’s the matter with him?”

Time for a moment of pause.

They seriously want to know why he’s acting like a happy kangaroo? Really? I mean, no April Fools, no “ha-ha, got you on video”? Did they really and truly miss the fact that they just gave him about a cup of sugar disguised as food?

I pondered this as I moved on to my next kid. I sat down to work with him, and he started to fuss. The teacher threatened, “Do you want your cupcake?” “Yes!” he blurts. “Then finish your speech” she says. Meanwhile, I’m thinking, cupcake sticker, cupcake squishy toy, whatever.  It’s all good.  We finish working, and no sooner do I put my books and toys out of his sight than his teacher pops over with a half-eaten cupcake.

A real, honest to goodness, you-eat-it cupcake.  She plops it down in front of him as he digs in to the two inch icing with glee.  I barely managed to keep from yelling something inappropriate.  It was ten fifteen in the morning.  A CUPCAKE at 10:15 A.M.  What?what?!  And he’d obviously eaten the first half earlier in the morning!

Clearly frustrated, I go next door to work with the next kid. His teacher is giving him a test of sorts, asking him to repeat words to see what sounds he needs work on.  Right up my alley!  Lemme at it, sister!  I’ll take over.  So she forks over the test with a good-luck face and pipes, “This involves lots and lots of pancake.”

Yes, really. Sure enough, I have to toss a little triangle of pancake at him every five words so he’ll sit still and work with me.  And plain Jane pancake isn’t good enough.  He’s got a container of syrup that he methodically dips two sides of his triangle in before popping it in the kisser.

By this time I’d given up, but curiosity won and I asked the teacher whether pancakes were the best reinforcer for him. She shook her head and lamented, “Oh, it’s actually good that he eats those.  He generally won’t eat anything. Most of the time he has ketchup sandwiches for lunch.  He won’t eat meat, cheese, nothing.”

There’s not much time to figure out where I stood on this since I needed to hightail it to gather my next group of kids. On my way, I passed a basket of snacks that third graders brought from home.  Donuts, chips, cheese cracker squares, cookies, and snack cakes.  REALLY????

Here’s my advice:  stay away from processed foods.  Sugar, partially hydrogenated oils, anything in a package with eight thousand ingredients  crap, crap, crap.  Try to eat foods as close to their natural state as possible.  There is actually a section in the grocery store that has fresh fruits and veggies, I swear!

We Mommies tend to get things we can heat up and eat a bit quicker and I completely understand that.  However, I say we form a pact and vow to feed our kids just a smidgen less horse doody.

Go online or get a book by Dr. Oz or Dr. Andrew Weil and learn what foods are most beneficial. Eat them. Make your kids eat them.  No one will die of taste bud fraud, I promise.

I’m not saying it will be fun, but we’ll lose weight, have more energy, contract less colon cancer, and enjoy a higher self esteem because we don’t look like a giant, walking donut.  And our kids might actually experience some calm and stop acting like tyrants.  Yippee!